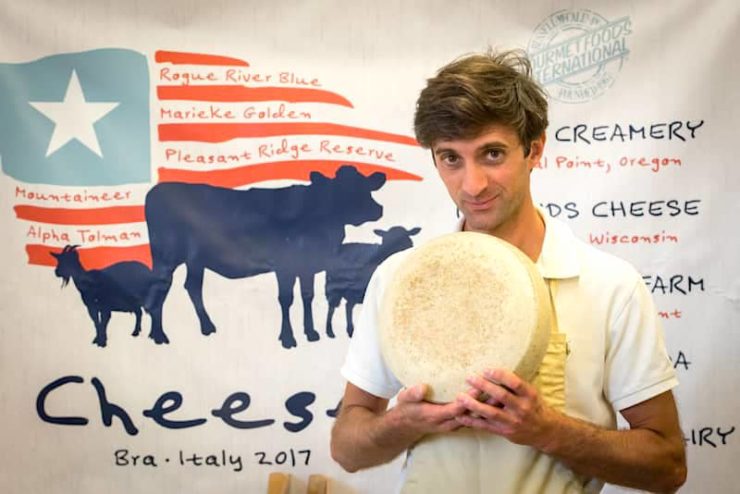 Ever had Gorgonzola on a cone? And what's the deal with raw milk cheese? I found all of that, and more, at Cheese 2017 in Bra, Italy

Last September, the town of Bra (Piedmont region, in the North of Italy) hosted Cheese, a biennial international exhibit about, you guessed it, cheese! The event is organized by Slow Food, the Italian-born movement for “good, clean, and fair” food, which promotes biodiversity and food sustainability all over the world. For four full days, cheesemakers, cheese refiners, cheesemongers, and cheese fans invaded  the quaint streets of Bra, together with cheese of any kind, shape, age, and origin.

As a huge cheese lover and a Slow Food member, I could not miss this massive event, so I made my way to Bra, as excited as a child going to Disneyland. Here’s what I saw, tasted, and learned. 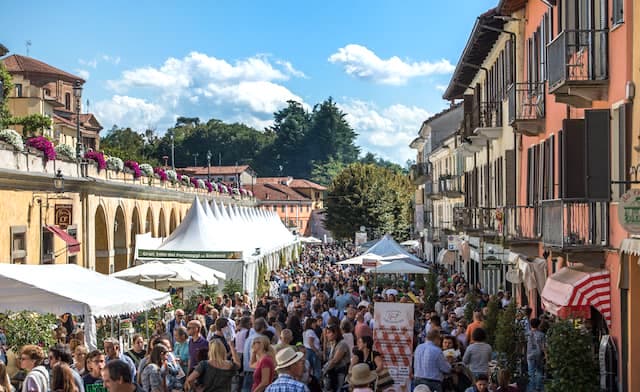 The town of Bra during Cheese 2017

Imagine cheeses from all over the world and the possibility to taste them all!

I knew that each vendor at Cheese offered free tastings of their products (and, believe me, there’s plenty for everyone) but, with more than 300 exhibitors, it soon became clear that I could never possibly try every kind of cheese present! For this reason, I had to be selective, and make sure not to miss the unique ones. To start with, I grabbed a slice of bread and Swiss Raclette and called it breakfast, then I had some luscious and creamy Gorgonzola on a cone (yes, like gelato), before running to the conference about American raw milk cheese.

But let’s step back. The focus of the 2017 edition was cheese made with raw milk, and the guest country was the United States. I guess it has never crossed your mind what kind of milk is used to make the cheese you’re eating, but think: Being milk the main ingredient, isn’t it important to know some more about it? 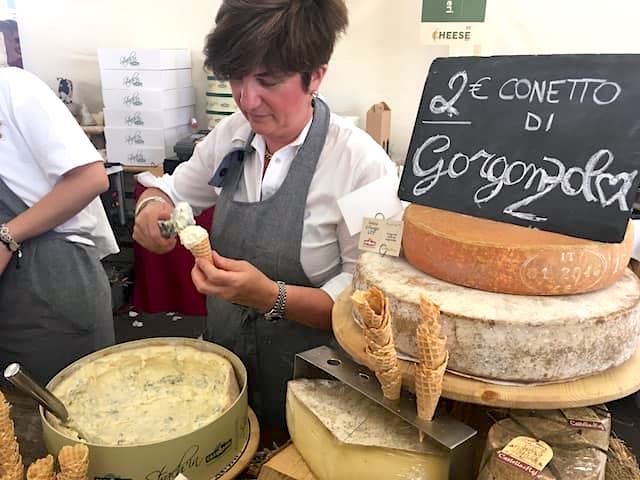 Gorgonzola on a cone!

First things first, cheese is normally made with pasteurized milk, that is, milk that’s been treated in order to kill the bacteria in it. So, is raw milk cheese safe to eat? After all, for years we’ve been told that we have to bring fresh milk to a boil before consuming it. True. But if the animal is healthy and free to spend most of its life grazing grass in a pasture, the bacterial load in its milk remains low. Then, checks are done to ensure that the milk is completely safe. With these conditions, there is just no need to pasteurize it.

If we are so picky about wine, why do we keep buying tasteless industrial cheese?

This does not happen in industrial farming, where the animal is squeezed into an overcrowded shed, where bacteria is most likely to proliferate, and fed hormones and antibiotics. It’s a no-brainer: That milk needs to be sanitized to be safe for consumption, with processes that get rid of the bad stuff, but also of the character of the milk itself.

RELATED: How Massimo Bottura Fights Food Waste, and How You Can Too

On the contrary, raw milk has higher nutritional value, and still contains the good bacteria and all the flavor compounds that tell a story about the animal, its breed, the grass it eats, the typology of area it lives in, and so on. Combine this kind of wholesome milk with genuine artisanal techniques and you’ll start to get the idea why raw milk cheese is so special. 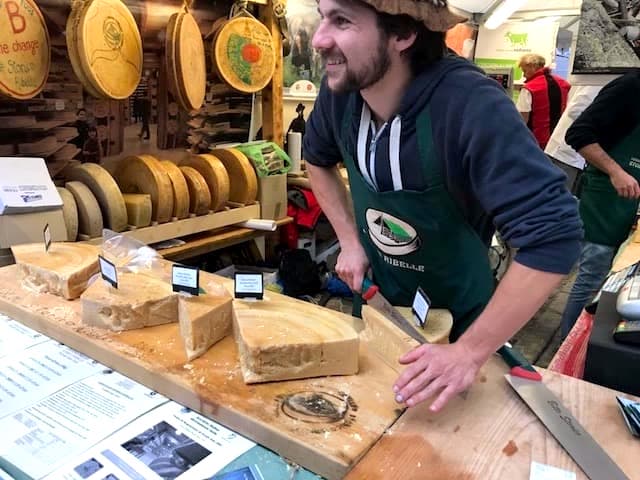 One of the hundreds of cheese vendors at Cheese 2017

Knowing that the whole Cheese exhibit only featured raw milk cheese, I could not go wrong! My curiosity first led me to the Slow Food Presidia row, displaying those Italian and international cheeses whose traditional making practice is under the protection of the organization (that’s about 95 cheeses in total in the whole world). When an animal breed, a heirloom vegetable, but also a processed product (like cheese, bread, cured meats…) risk disappearing, the Slow Food Presidium project makes sure they don’t go lost, working closely with small-scale farmers and producers and encouraging them to keep doing what they have been doing for generations. This is done to preserve the heritage and biodiversity of a certain area.

Having such a diverse territory, Italy has plenty of Presidia, including many cheeses, like the Caciocavallo Podolico del Gargano (from Apulia), chewy and rich, made only with Podolica breed cows’ milk, or the Piacentinu Ennese (from Sicily), an aged sheep’s milk cheese with saffron threads that make it yellow in color. 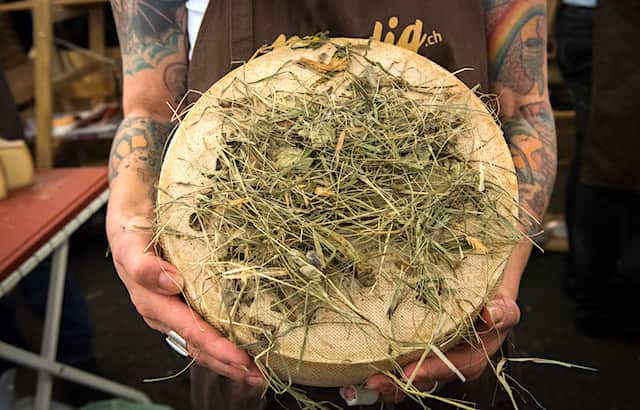 Pretty much any type of cheese you can imagine…

In the United States, sadly, there is only one American Raw Milk Cheeses Presidium, which gathers those 24 cheesemakers across the country committed to making raw milk cheese in a context of challenging FDA regulations. Some of these brave producers were at Cheese, so I could taste what they brought, like the Smokey Blue by Rogue Creamery (Oregon), which gets its smoked flavor from burning hazelnut shells, or the Pleasant Ridge Reserve by Uplands Cheese (Wisconsin), an Alpine-style cheese with complex nutty flavors and a delicious subtle crystallization. For the record, April 21, 2018, will be Raw Milk Cheese Appreciation Day in the United States, so it’s a good idea to get informed and start looking for your local cheesemongers to taste some!

Among the other international Presidia, I’d mention the Boeren Leyden from the Netherlands, a hard cow-milk cheese with cumin seeds, and Geitost from Norway, a dark block of mixed-milk cheese (cow and goat) that reminded me of salted caramel, brown butter, and taffy candy. 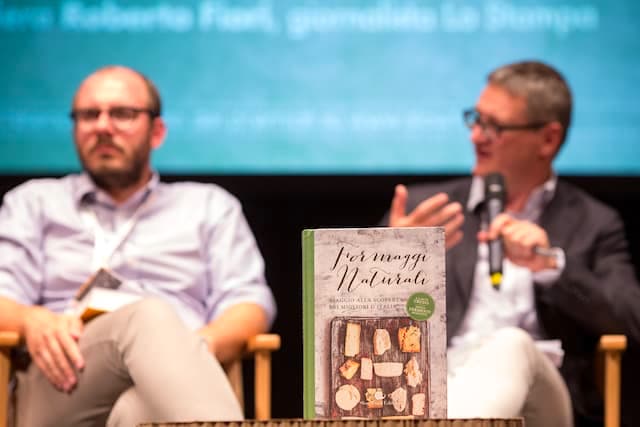 The Slow Food Presidia row was only a small part of the comprehensive Italian and international market, where I could taste and buy amazing cheeses directly from their passionate producers, from French Roquefort to Artisanal Cheddar from Somerset (UK). 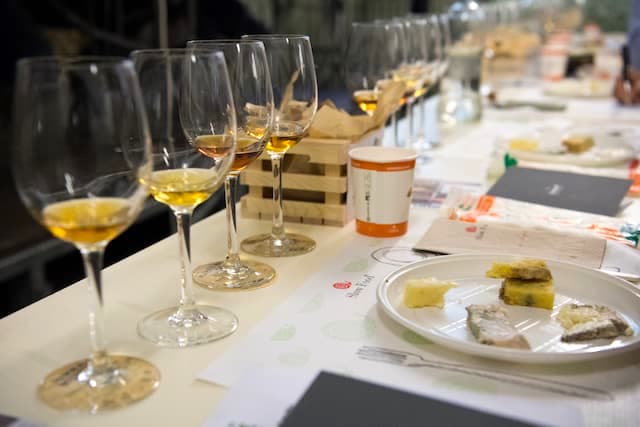 Washing down, ahem, pairing cheese with wine at Cheese 2017

Cheese 2017: Changing the way you look at cheese

Needless to say, I had a blast. The 2017 edition of Cheese amazed me more that I had expected, and changed me in a way that now I feel more conscious about eating and buying cheese. And more demanding, too! If we are so picky about wine and turn down the boxed ones, why do we keep buying tasteless industrial cheese? If we recognize that the territory, the soil, the environment, the climate, play a crucial role in defining a wine, why don’t we think the same about cheese? The variables are countless, just like in the wine world.

It’s not just “cheese”, it’s the expression of those variables. It’s what the animal eats, where the animal lives, how the animal is treated. And raw milk is the manifestation of biodiversity and authenticity in cheese, combined with careful cheesemaking practices. Because, as one of the American producers remarked during the conference, behind real cheese there should not be sterile equipment, but real people, carrying on uniqueness and tradition.

Photos by Serena Boschi for Foodiamo. All rights reserved. 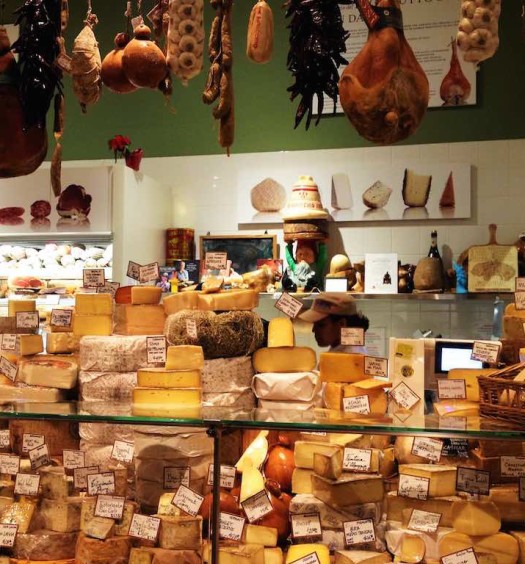 Why Eataly NYC is the Ultimate Italian Foodie Paradise 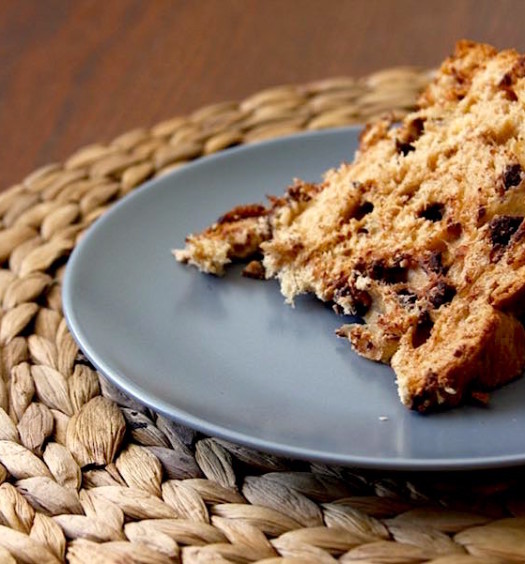