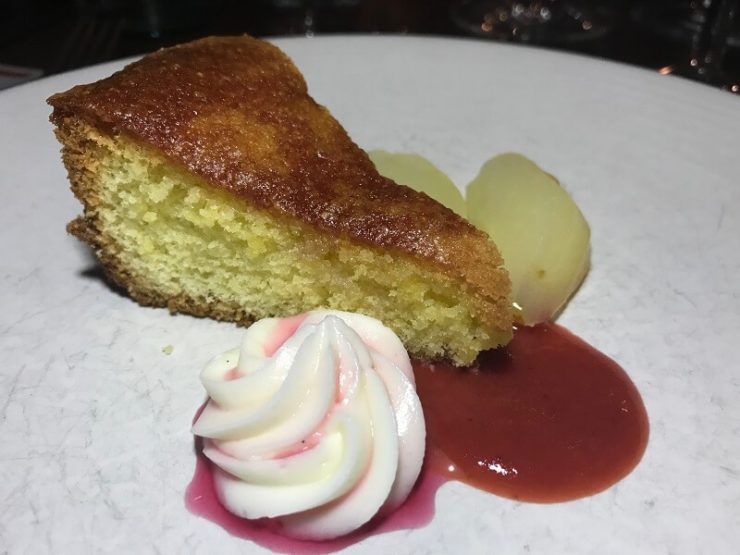 What happens when five of Italy's top chefs come to LA? One epic dinner, courtesy of Identità Golose and Eataly

Have you ever had 5 top Italian chefs cooking for you? Well, neither did we—at least until the other night, when, for the final event of Identità Golose Los Angeles, Eataly LA hosted five of Italy’s most famous chefs, put its kitchens at their disposal, and let the magic happen (Spoiler: it will happen again next year, so keep your eyes open!) 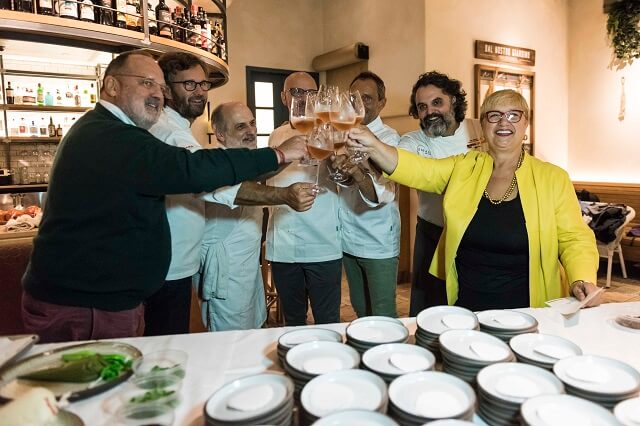 Founded in 2004 by Italian food journalist Paolo Marchi, Identità Golose showcases the greatest Italian and international chefs, pastry chefs, and artisanal producers around the world. Through culinary seminars and collaborative dinners, the organization promotes contemporary Italian cuisine, often in a dialogue with culinary traditions from other parts of the world.

After several editions in NYC, it was finally LA’s turn. “For us, the door to enter the US was New York,” founder Paolo Marchi explained. “After we established ourselves in New York, we wanted to do more. So we went to Chicago and Boston. But Los Angeles, as the capital of the West Coast, was always on my mind. Then, when Eataly LA opened, we were able to bring Identità Golose here.” 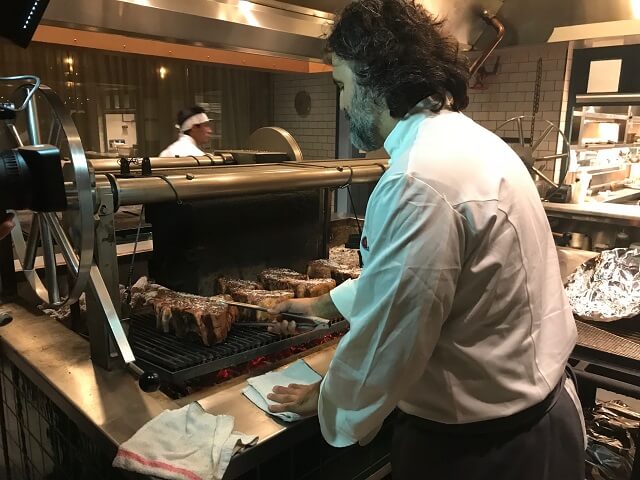 The venue: Terra, the rooftop restaurant of Eataly LA, with a gorgeous terrace overlooking Beverly Hills, Century City, and the Hollywood Hills.

RELATED: What to Eat at Eataly LA Restaurants

The host: None less than Lidia Bastianich. As an ambassador of Italian taste in the US, she was charged with translating some of the chefs as they explained their dishes to the guests—not an easy task, those guys speak fast!

The theme: Fire, the most ancient source of heat known to man. One way or the other, the chefs took advantage of the impressive grills at Terra, which are normally used for arrosticini and other meaty delicacies.

All right, so what did we eat? 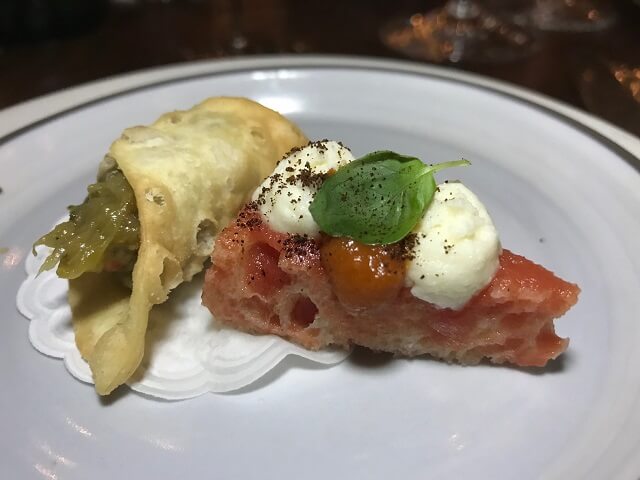 At his restaurant Grigoris near Venice, Lello Ravagnan constantly experiments with leavening and baking. A testament to his passion, his “Benvenuto” was actually twofold: Cornicione Evolutivo and Cuore di Margherita. Two bites, two creative, sophisticated riffs on Italy’s most popular food, pizza.

RELATED: Taste Pizza “by the Cut” at Triple Beam Pizza

The Cuore, i.e. “Heart”, was especially interesting: basically, a crostino made of pizza dough, topped with Grana Padano cream, burned cherry tomatoes, and basil. Perfectly in line with the spirit of Identità Golose, which is to blend Italian culinary tradition with innovation. 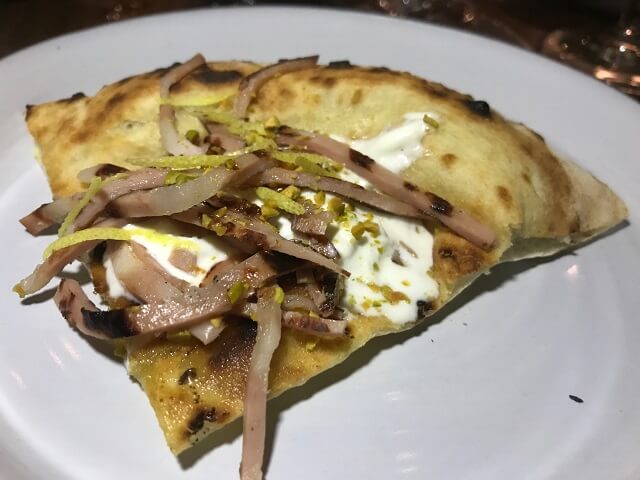 LA’s pizza lovers, and especially Foodiamo readers, may be familiar with Franco Pepe. The pizzaiolo from Caiazzo, 30 miles from Naples, has brought his creations to Los Angeles on several occasions. Back in 2015, he delighted a small crowd with this demonstration at Chi Spacca (watch video below), and then again in 2016 for the Extraordinary Italian Pizza Day at DeSano.

His Viandante pizza (i.e. ‘traveler’, ‘wayfarer’) took us through the regions of Italy. “We incorporated different parts of Italy into this pizza,” Pepe explained. “The mortadella (from Bologna), shreds of buffalo mozzarella (from Campania), and the pistachios from Bronte, Sicily (they have the best pistachios in the world), then lemon zest, and bergamot oil. This an oil from a citrus typical of Calabria, a green lemon with a very intense aroma.” 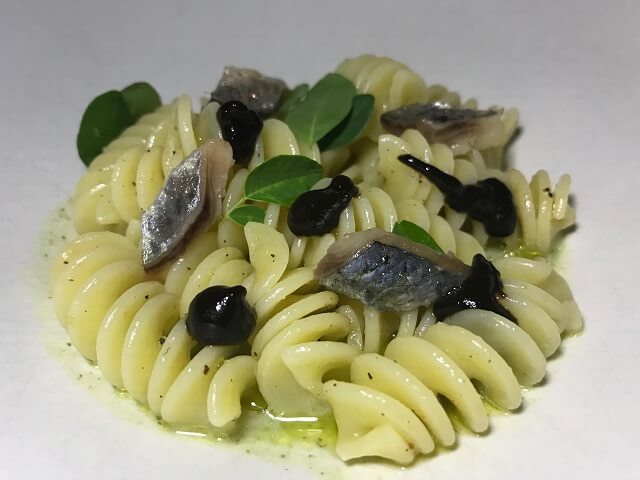 Could there be a proper Italian meal without pasta? Yes, of course, but why would you do that? Especially when a Michelin-starred chef prepares your pasta. We’re talking about award-winning Carlo Cracco, a real celebrity back in Italy.

For the final night of Identità Golose Los Angeles, Cracco chose fusilloni, aka large-size fusilli, from the Monograno Felicetti pastamaker. The sauce? Not something that you would probably cook at home: smoked mackerel, sorrel, and black garlic. Black garlic is obtained by heating whole bulbs of garlic over an extended period of time, so that the original flavor gives way to a sweet, syrupy taste. Overall, it was an interesting combination, although the ingredients didn’t quite come together. 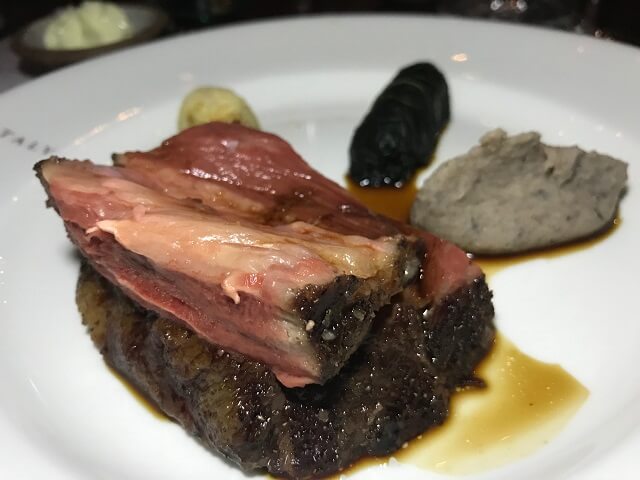 Marco Stabile’s pièce de résistance came next: a series of gigantic, Fred-Flintstones-size bistecche alla fiorentina, aka Florence-style steaks, which caused a real uproar in the restaurant. Some took selfies with the steaks, while others gathered around the grill trying to learn tricks for their next backyard BBQ party.

The chef claimed to have brought the steaks from Italy in his luggage. Those in the audience who ever tried to smuggle in a single salame doubted you can pass through customs with such a load. No matter how they made their way to the grills at Terra, we were very happy that they did. 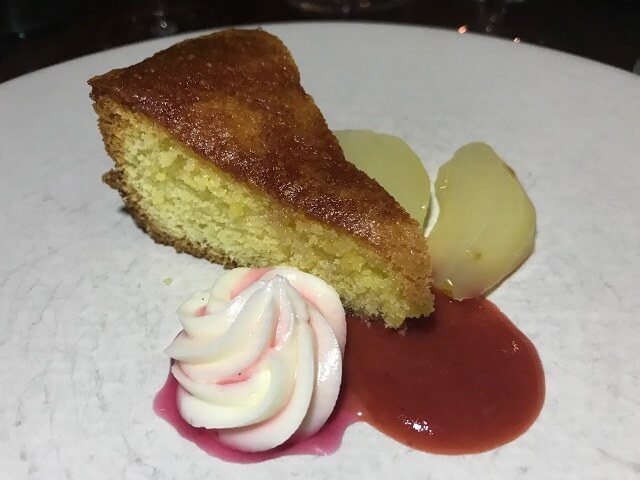 Hailing from Sicily, Corrado Assenza proposed a perfect way to end the meal: an almond sponge cake with double cream of lemon flower and plum sauce.

The main ingredient for the cake – almonds from his hometown of Noto – was not a coincidence. “When I was sick, my mother made me an almond soup with rice.” Assenza recalled. “It’s a healthy food, a convenient food when you have a fever… It remained in my memory for the creamy taste, the softness of the rice, and the flavor of the flour you have through the almonds.”

Almonds, Sicily… Does it all sound familiar? See if you can spot Corrado in the trailer below, as he prepares almond granita and cannoli on his own Chef’s Table Pastry episode.

In fact, we also talked about what being featured on Chef’s Table meant for his pastry shop, Caffè Sicilia in Noto. “We got an increase in business and so an increase in responsibility. When people come to Noto from all over the world, it means a more intense responsibility to demonstrate how much we love what we do. The most popular dish is still gelato, cannoli, cassata, and the brioche dipped in granita is another best seller.”

So… Are you planning a trip to Sicily yet? 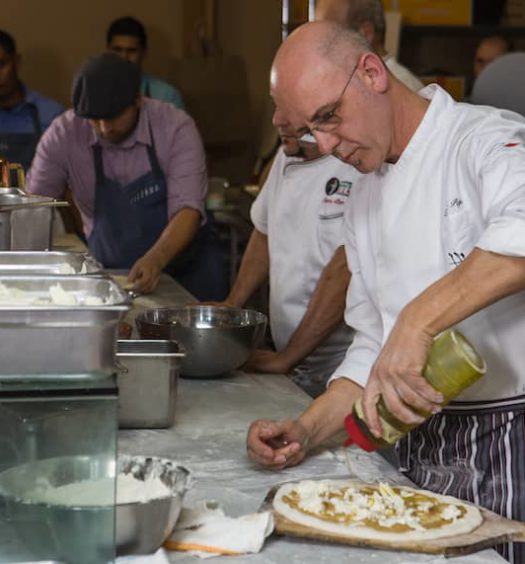 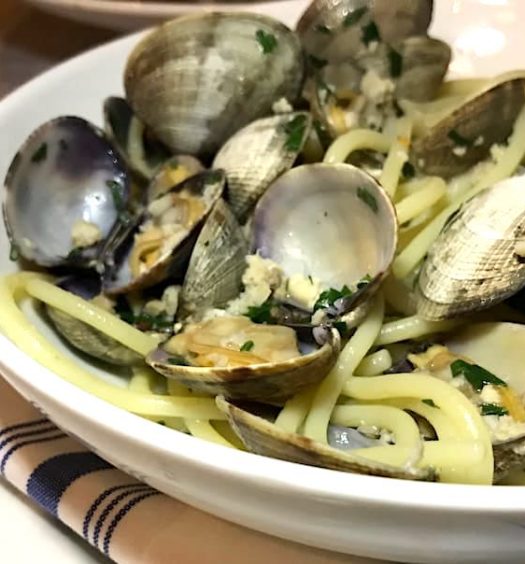